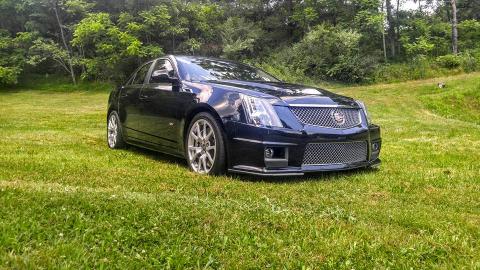 If you follow me on social media (Instagram, mainly), you will notice that I traded in my 2010 Camaro 2SS/RS M6 car for a black 2011 Cadillac CTS-V sedan. Having almost max'd out the power on my nearly full bolt on 5th gen, I knew the next step would be cam and/or forced induction. Anyone who knows me personally, knows that I love the V2's. I've been watching their prices since they first came out in 2009. Amazing, amazing cars. After having a manual Camaro, I wanted to go back to an auto to remove any sense of the words "DRIVER ERROR." Not to mention, the 6L90e's handle BIG power (north of 650rwhp) without skipping a beat.

I have been watching reviews of this car like no other car before, which inevitably led me to buy one on a whim (that and seeing the OCMD Cruise Spring 2016 show littered with them). The reviews were pretty solid, especially on Youtube from /DRIVE, SubaruWRXFan, Leno and another one by Matt Farah that I can't seem to locate - not to mention the countless others. Unfortunately, none of these reviews emphasized the actual flaws of the car. Yes, the 09-15 CTS-V does have flaws! The "flaws" I list are what I consider flaws. The dealer calls them

1. Brake squeal. My 5th gen's Brembo's did the squeal as well. It's annoying, obnoxious, and loud! Generally light braking doesn't make the noise, but heavy braking to a stop makes them scream. I solved the squeal with some Powerstop Z26 pads on the 5th gen, so I plan on doing the same to this car, most likely over winter. Maybe new rotors as well, we shall see. Fortunately, you cannot hear the squeal from inside the car with the windows up and A/C on.

2. Squeaky suspension. Apparently this is a "thing." But no one talks about it. It's mainly when there is weight in the back seat and going over a speed bump. According to the dealer, it's normal. Shocks are great, springs are fine, magnetic ride is fine. When I bought it with 25k it made the sound. Very intermittent, but occasionally I hear it.

3. 4x4 steering rack. Okay, handling on this car is disgusting for a heavy sedan. It will out handle anything in it's class and most cars not in its class. However, when you turn the wheel to make a sharp turn, and slowly move, the car feels like a 4x4 truck. Supposedly it's normal and has to do with the suspension setup and wide tires. I don't really care, but really? Why isn't this mentioned in a damn review?

4. No music over bluetooth! My only real pet peeve aside from squealing brakes is not being able to stream music from my phone to the car easily. My 2010 Camaro had this capability with a shitty, non-touch screen radio. Yet this car cannot. I believe this functionality came about in 2012 V2's and has something to do with the bus that was used. I have hands free calling, just no easy way to stream music. My work-around was an AGPtek Handsfree USB Car Charger Bluetooth A2DP 3.5mm AUX stereo Audio Receiver Adapter. Basically, I plug it into the cigarette lighter in the center console (out of sight), and it plugs into the 3.5mm auxiliary port in the same area. If I want to stream music, I simply change the audio input to Aux and press play on my phone. I also have a Proclip dock so the phone is always charging in the car.

5. Brake dust. This thing has to be eating brake pads. I'm interested to see what a set of ceramics would do because it's BAD. I can't go on a 10 mile ride without my front wheels getting covered in dust.

And that sums up my list. I love the car, it kicks serious ass. If you never drove one or were even never in one, go for a ride. You will fall in love. I love the supercharger whine. With just a CAI and DiabloFormula Racing tune, it's a phenomenal driver. Loads of power everywhere, fun to mod, just watch out for the damn Cadillac tax on everything!