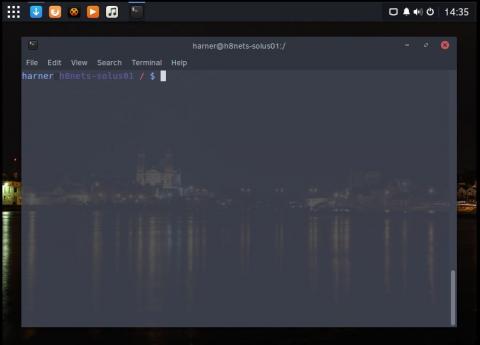 Long ago, it was my job to set up and tear down Linux servers. It was fun, forced you to learn things on the fly, and made for some exciting work days. Fast forward to now where my respect for Linux is still on high, however my skillsets have since moved away from the dark side. Linux is nothing more than a hobby at this stage in my career, however I still find myself dabbling with it from time to time.

I have run Linux as my primary OS many times, however gaming has always lead me back to the M$ world. I have installed and used MANY flavors of *nix out there, including SUSE/OpenSUSE/SLES/SLED, Ubuntu (and most other bigger Debian-based distros), Slackware, Arch Linux, Red Hat/RHEL, as well as many lightweight distros, etc. Hell, even hacked a few small devices around the house that were running a Linux back-end (including my Iomega NAS).

My goals with Linux vary depending on my needs. For today, it's to play in the sandbox and find out what all the hype is about with the SOLUS PROJECT.

I installed this OS (v1.2 x64) on my primary desktop via VMware Player with dedicated 4GB RAM and 4 vCPU's. It installed pretty fast and the ISO was not as large as I thought.

First thoughts:
Very minimalistic, which I like. Everything just works and is easy to use. I would assume the developers geared this distro towards individuals who may not be Linux buffs, but are open to something new as long as it's packaged with everything a normal M$ PC would have (ie Office, calc, couple stupid games, web browser, mail client, music player, etc). Yes, it has all the things, but what if I wanted to customize the look and feel? What if I wanted to load Webmin and turn this into a server? Is it a practical server OS, how about security? Many questions quickly raced through my mind.

A step beyond the average user:
So let's say a power user sits down and wants to use this distro as a Windows alternative. Is gaming an option? Well, yes, sort of.
Some big games are supported by Linux, such as Minecraft. Solus actually has install instructions for this game in their wiki HERE.
Other games are available via Steam as well as other platforms. Linux has plenty of cool native games. Tremulous, Armagetron, SuperTux, SuperTuxKart, etc.
Great, it has some games. How about productivity? That's easy - M$ Office equivalents existed for years with OpenOffice and a bunch of others. You can even open and save regular Office files with it.
Modern design software, a la Adobe suite? How about Gimp, Krita, Pinta, or hell just run Photoshop in Wine :)
Chat software like Skype, Google Places, etc. Well - Google's software is easily available and works well, but Skype has not been ported properly.
Is software easy to install? Yes, if the software you want is available. I am finding that since Solus doesn't support RPM or DEB files, most software will need to be installed from source, which kind of defeats the purpose of gearing this OS towards someone not very fluent with Linux in general.
Using it as a server: Web services, Network monitoring, Fileserver, worth it? No, there are many better choices out there. This is geared towards the average user that needs basic functionality. Web, productivity, printing, a game or two to pass time, and that's about it.

Final thoughts:
Easy to use and maneuver around.
I can play minecraft on it. Haha.
Web browsing is to be expected, along with using some standard applications.
I wouldn't hang up my Windows partition any time soon.
I was expecting better, to be honest. This distro received a lot of hype.

Since I never formally reviewed an OS or distro before, I can't really rate this. I like it, I'm just not sold on it. After they add some more popular packages as an easy-to-install piece of software, then I'd take it a bit more seriously. But, as an OS that was built from the ground up and has a fresh/sleek appearance, I am eager for future releases.